2021 has been another fascinating year for the UK broker market. We look at some of the main trends – including ownership, M&A activity, market concentration and sector specialism.

The following article has been taken from our work with Insurance Age in their Insurance Age Top 75 feature. The original article can be seen here.

The largest brokers get larger

Whilst not surprising, the data confirm that the largest players in the broker market are getting even larger – the top five brokers now each generate over £500 million of income annually.

This means that the majority of broking revenue is concentrated with the big international brokers, with the largest six operators accounting for 60% of the industry’s total revenue.

Interestingly, the data show a cluster of brokers in the £100 to £250 million revenue bracket. We will wait to see whether any of these challengers will make the step up to the next band in the coming years or whether they will be sold before they can make the move up.

Merger and acquisitions have continued apace of the past 12 months, with brokers of all sizes – from those with sub £1m revenues right up to the top multinational players – completing deals in order to bolster their growth. Indeed, half of the respondents to our survey have made at least one acquisition in the last year.

However, a more detailed analysis of the data reveals another very clear trend – the traditional consolidators remain the most active from an M&A perspective.  Some of most prolific consolidators who have responded to the survey have completed over 20 deals in the past year, and their attention is increasing beyond the UK to locations in mainland Europe and even Australia.

Since 2021, there have been some large new entrants and transactions within the market, which has and will continue to significantly affect the composition of our broker universe. Perhaps most notably, the purchase of Aston Lark has enabled Howden to continue its ascent up the rankings, while large US brokers Brown & Brown and Acrisure have made a concerted effort to break into the UK market in a meaningful way. Brown & Brown, in particular, with its acquisition of GRP, has significantly increased its UK exposure.

Over half of the brokers in our universe are privately owned, making this the most common ownership model – at least for the time being.  The fact that these brokers generally tend to be smaller, and are a popular source of acquisition target for the consolidators, means we expect many of them to be snapped up in the coming years. However, based on the number of start-ups PKF is seeing, it appears that there is a healthy pipeline of new entrepreneurial entrants waiting to take their place.

The picture changes significantly when looking at the ownership of brokers by their share of revenue.  The large US listed brokers are now the most dominant – representing 45% of the total – and this has increased in the past year as Brown & Brown has continued its acquisition-led growth strategy.

As would be expected, the private equity industry is now a major player in the UK broker market, owning roughly a quarter of the brokers by number and 33% by revenue.

Within our broker universe as a whole, commercial and retail brokerage income is broadly evenly split at 50% and 45% respectively, with wholesale broking making up the remaining 5%.  This appears surprising – we would have expected there to be more of a focus on commercial brokerage – but is partly explained by the fact that some of the largest operators, which specialise in commercial lines, did not provide a revenue breakdown for our analysis. 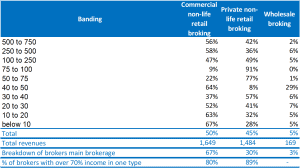 Looking at the numbers in more detail reveals that most individual brokers tend to focus on one specific area – either commercial or retail – with a minor presence in the other, rather than having a significant presence across the board.  This underlines the point that there are two distinct business models – commercial or retail – and few brokers are willing to cross the divide.  Even when they do, there is a clear difference between how these areas are approached; generally those brokers that choose to operate both business models will keep them separate within different parts of the wider group.

How we have analysed the data

The current macro-economic climate, coupled with weak financial resilience caused by the cost of living crisis, may tempt firms to cut corners in their client money compliance.

Broking Business: The challenges of CASS 5: the FCA is watching

In July 2022 the FCA published details of its new Consumer Duty. Here’s a recap of the key points.

Broking Business: The new Consumer Duty – how to prepare for 2023

The FCA has published a policy statement, Improving the Appointed Representatives (ARs) regime, which sets out its updated rules and requirements for principals and ARs.

When you’re closing the 2022 year end financials, tax for 2023 may not be at the top of your list. But the time of year means changes are not far off. Here are some pointers to consider.

Broking Business: Tax accounting – what to think about at year end 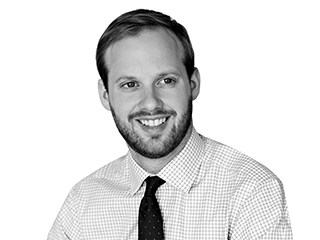