Steve Cliff was part of our Tax team for seven years, before moving on to other roles in Hong Kong, the Isle of Man and Guernsey. In this interview, which first appeared in our Alumni News publication, Steve, who has recently retired, picks out the highlights of his eventful career. 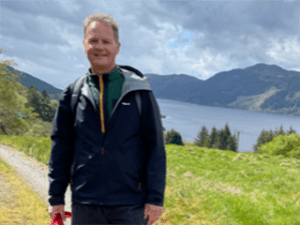 Q. Tell us about your time at PKF?

I joined the Tax team at what was then Littlejohn Frazer in 1987, just a year after leaving university.  In those days, we would take our CTA tax qualifications first and then go on to the ACA accountancy exams.  I had no desire to become an auditor but being ‘double qualified’ in this way opened a lot of doors for me and made me something of a rarity in the sector – I don’t recall meeting more than a dozen people during my entire working life who had both the CTA and ACA qualifications.

Q. What are the highlights from your time here?

Well, I met my wife, Marion, at the firm so that’s an obvious highlight!  While lots of businesses might claim that help to foster life-long friendships among colleagues, I think PKF is rare in actually succeeding to do that.

Being in Canary Wharf during the area’s early days was also memorable.  We were among the first businesses to move here, back in the mid-1980s, which was very forward-thinking of the Partners at the time.  It felt like we were in the middle of nowhere and most of Canary Wharf was a building site at the time – walking to and from the DLR was interesting, particularly if it had rained, and so mud-caked shoes were a regular feature; and I remember our whole office vibrating when the builders were driving the piles for the iconic One Canada Square tower.  On the upside, we had a wonderful canteen which, to a young man in his 20s with an appetite like a horse, was a major attraction!

Q. Where did you go next?

After seven years at the firm, I was offered a job in Hong Kong by my former boss, specialising in offshore trusts.  Hong Kong was the best place I’ve ever lived – the noise, the crowds, and the food were all amazing.  I was based in Hong Kong during the handover to China in 1997, but missed the parties on day itself as I was back in the UK for a family wedding.

Q. You’re now based in Guernsey.  How did that come about?

Given my specialism in offshore trusts, I moved from Hong Kong to the Isle of Man and then Guernsey.  I joined a fiduciary business in Guernsey in 2001, which had 30 people at the time.  It grew to over 500 people and we listed in 2017.  Interestingly, the company owned the PKF name in the Channel Islands at the time so I have a multiple connections to PKF!

Q. What do you miss most about the firm?

It goes without saying that I still have fond memories of a number of people, including Alan Knapp, John and Angela Parry, Mike Rutland, Mike Fenwick and Barry Luscombe – who was my first manager and is still at PKF today!  I’ve been fortunate to be able to keep in touch with a lot of them throughout my career.

I also miss our old office building, in Park Place, which is now sadly demolished – although the site of the building is right next door to PKF’s current offices. And, of course, the canteen!

Q. You’ve recently retired.  What are your plans for the future?

Guernsey has become my home, so I’m planning to spend my time between here and a holiday home we have in Scotland.  I’d also like hike to Everest Base Camp if my old football injuries go away – I’m now paying the price for those tough matches in the London Accountants League Division 4!